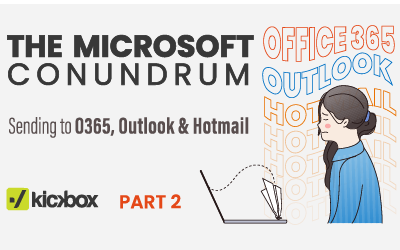 > Part 2: Other Important Tidbits about Sending to Microsoft: 6 factors that can impact your deliverability

As we discussed in The Microsoft Conundrum, Microsoft is starting to make some changes. It’s been a longstanding understanding that mailing to Microsoft can be quite the undertaking, especially as a new sender. What is beginning to come to fruition is the shift in how the filtering scales measure domain reputation and the importance of domain alignment.

However, until the day comes where one can flat out say, just mail wanted mail and it will deliver (the general Gmail mantra), there are some additional things to keep in mind. These weighing factors shape the strategies you use to introduce yourself and to get yourself out of a pickle when you’ve found you’ve fallen out of the good graces of Microsoft’s filtering.

6 Other Tidbits You Should Know about Microsoft

New is not welcome

New IPs are not your friend, just like a newly created domain. Microsoft treats new ‘things’ about the same way a toddler approaches new foods – with great hesitancy and doubt. Instead of taste testing, Microsoft tends to assume it’s ‘yucky’ and banishes mail to the spam folder. Then they watch for signals that it shouldn’t be there. Is anyone else enjoying it? Is anyone looking for it? Is anyone reaching out to talk about it? And this “guilty until proven innocent” methodology can be very frustrating for a good sender.

Another new thing Microsoft is averse to is volume change. Even if you are on the same setup, if you spike volumes or vacillate too much, you may very likely experience delivery issues (retries, time outs, blocks) or deliverability issues (“Hello spam folder!”).

This is why pre-emptive accommodation requests are a go-to step when you know a change is coming. Deliverability experts and amateurs alike will visit Microsoft’s online sender support form to share the details of their sending IPs, anticipated volumes, and dates of mailing.

What Microsoft does like is history. When you have an IP with a long history of sending wanted mail, you have more leeway to flex and change. But, again, any new ‘thing’ in their system will be swarmed and swept away until the system can determine if the mail is safe and wanted. So always approach a change with a transition period in mind.

Smart Network Data Services (SNDS) is Microsoft’s postmaster page that shares the results of what Microsoft is seeing from your IPs. It doesn’t factor in domain information or tell you current reputation, but it gives a past view of what their systems received. This tool has been around for at least 10+ years..

For the longest time, it remained stagnant. The only real changes were tied to the data reported or when it went down. However recently it’s been starting to provide additional information to provide more insight for senders to help move them in a way that improves performance. And, the more data, the better.

Now, in addition to filter results, volumes, and a general range of complaints, you can see the sender address tied to abuse reports. This is great data for those on shared IP environments and ties into the push to highlight and action on domain behavior.

Where SNDS will go or if it’ll be replaced isn’t known, but it is clear that Microsoft is adjusting.

Sender Reputation Data (SRD) is an internal metric for Microsoft that is used to help them figure out what mail is wanted and not wanted. This is not a metric readily available to the public nor is it shared in SNDS.

To calculate their SRD rate, Microsoft will ask its users if they want to provide feedback on the mail they receive. If they say ‘yes,’ they are included in Microsoft’s SRD panel.

These panelists are then asked to vote on whether or not they believe a message they received is junk or not. And only SRD panelists that receive your mail will be asked for their opinion. Microsoft won’t offer up your message to someone you’ve never mailed before.

These panelists are proxies for how your customer base views your mail. So one vote carries a lot of weight. It’s not a replacement for spam complaints, but another signal they feel holds significant value as they are directly asking their customers to provide feedback versus a spam complaint button that may be used as a way to delete messages versus truly complain.

The number of panelists your program hits may be a handful to a couple dozen or more. In general, the panelists Microsoft gathers change over time. So depending on who they ask and where they are in your relationship, you could occasionally be garnering negative SRD votes that aren’t always representative of your customer base.

Between the many layers Microsoft has in place from their legacy systems and their newer systems, I often find Microsoft is quick to draw the filtering ‘red card.’

When you start to see Gmail filtering, you can usually pin it down to engagement-related issues. Microsoft, on the other hand, is harder to determine what the true problem is. It’s often up in the air if it’s due to too much variability with volume, content, one too many SRD votes, an outdated spam filter, SmartScreen filter getting overzealous with its assessments, domain issue, IP range issue, IP issue, etc.

So when bulking begins, it’s time to visit their online sender support form and file a ticket. This will come with a number of rounds of back and forth. Do not give up.

You will get generic responses from them, often saying nothing is wrong (but if they do say something is wrong you have to fix that) or that you have to sign up for their Junk Email Reporting Program (JMRP), which is their Feedback Loop (FBL). Which, BTW, is likely already done for you if you are using an ESP.

Then you need to reply that you do see an issue, which you will proceed to explain in depth, and, yes, you do have SNDS and JRMP. You’ll receive another generic reply and then you’ll have to follow up again explaining your case and asking for escalation. This will go on at least 3-4 times. And then you can get to the meat of the problem.

Similar to introducing anything new, Microsoft does not like change. When you deal with Microsoft, if you want to change anything, test first, ramp second, then cross your fingers. Filters don’t discriminate, I’ve seen plenty of mailbox providers filter their own mail.

One Microsoft, but Two Sides

If you are a sender to B2C and B2B, you may know this. If you focus on only one, you may not. Back in 2017 or around that time, Microsoft migrated their Exchange Online and their consumer business to one system. You could digitally see this change in the MX records—hotmail.com moving to some form of olc.protection.outlook.com.

From a sender point of view, this should at least simplify things. But not really.

So although this is all coming into one system (and we can debate if it’s truly one system), there are clearly two different tracks within it. And this is evident in how the bounces are different and remediation paths are different.

And it makes sense that there would be two paths at some point. B2B mail functions much differently than B2C. The signals between the two vary. Not only is the use case different, but the expectations and user behavior is also different. There are abuse vectors that come at businesses differently than how they attack the average email recipient on the consumer side.

B2B also has administrative layers that add complexity and customizes the filtering thresholds, the use of additional firewalls, security, and Microsoft Defender features like Safe Links. Feedback may go to the admins and they may or may not share additional data with Microsoft.

The B2C side is a little more straightforward in that it all follows the same filtering decisions. Email user feedback goes straight to Microsoft with no middle-man. User actions are tracked within the UI allowing them to customize their filtering decisions and the user experience. However, if there is an underlying problem with reputation, that is seen across both ‘systems.’

Want to know who you are mailing, Spam Resource lists out the B2C consumer domains, but you can also take a peek at the MX record. B2C generally follows —

Microsoft doesn’t support BIMI at this time, but they were offering a submission process through Microsoft Business Profiles and then Bing Profiles to enhance your brand’s appearance in searches and across their apps. However, even these paths have gone by the wayside.

Moving forward, I suspect they may even adjust how this is done. Or maybe they’ll revisit BIMI in the future, who knows?

For now, you can give their Bing page a shot, but also keep working on BIMI and your email authentication protocols. Regardless of how Microsoft implements logos in email, you’ll be in the best starting place if you get yourself set up with what is in place today, BIMI.

The Microsoft Conundrum Marches On, For Now

So although Microsoft may not be fully solved, at least you have some tools to use and some things to think about as you move forward in your program and how you want to mail to your Microsoft customers.

As we closed out last time, best practices will always be the key to having the highest probability of hitting that inbox.

And for now, a little extra care for Microsoft goes a long way. Be patient as you work through any issues, it has historically taken time (months) to steer the ship away from the storm.

Keep that domain in check, stay consistent, authenticate and align your email, and be ready for an interesting ride as we see Microsoft continue to evolve their systems.

The Email Engagement Metrics You Should Really Be Paying Attention To

Use An Email List Cleaner, and 4 Other Ways to Increase Engagement

Photo By tonktiti One of the biggest challenges email marketers face today is achieving engagement with email marketing. Getting someone to sign up to your email list is a challenge on its own, but receiving no engagement can be downright frustrating. Advancements in technology offer a wide variety of tools – including email list cleaners – that can help improve your engagement metrics. This article